Where are you from, and how long have you worked at Petra Cliffs?

I’m originally from Walpole, Massachusetts. I came up to Vermont in 2011, finished school in 2015, had a brief stint out in Denver, and moved back to Burlington in 2017. I’ve been at Petra for about a year and a half now.

You’re a route setter at the gym, can you explain what that entails?

I put holds on the wall. I set mainly boulders at the gym. The process usually starts by taking down one or a few older climbs and washing the holds. Then, I’ll check out what sets of holds we have available and decide how hard the climb should be. Usually I put all the holds on the wall, then try the climb, and tweak it to make it easier or harder. Once everything is done, I’ll have one of the other setters climb the finished route. It’s great being able to set with Cate, Dan, and Evan since we all have different climbing styles and strengths, and approach problems differently. Craig never climbs my stuff, but he’s okay too.

How has it been since the re-opening of the gym?

Things have been good! It was great to be able to reset a lot of the gym while we were closed, and I think we ended up with a lot of high quality boulders. A lot of people in my social circle I see only at the gym, so it’s been great to get back in touch with that group of friends.

Do you have a preferred climbing discipline (boulder/ropes)?

I prefer Bouldering to rope climbing because I love to be able to work on one or two really hard moves and feel that come together. Socially, I also love the culture of being able to sit around with some friends and all try the same few moves together, whereas a lot of time rope climbing can feel more like a solo pursuit to me.

Where is your favorite place to climb? It can be in Vermont or elsewhere!

Locally, I love bouldering in Smugglers Notch. Outside of Vermont, I’ve had some great experiences at Rocktown in North GA. The rock there is totally different from Vermont, it is sandstone, and the whole area is secluded on top of a mountain with a great campground and atmosphere.

What about your favorite problem ever?

I’m not sure if people will know what I’m talking about, but I set a blue V3 on the wave-wall with some blue slopers that was pretty great. Outdoors, Hard Water in Duxbury is a perfect combination of aesthetic location, quality rock, and great movement.

What's one thing you'd like to see at the gym as we upgrade to Petra 2.0?

I’d love some big holds! The more traditional style of setting at Petra has been very technical and crimpy, and I personally am more interested in compression, slopers, and more physical movements. It will be awesome to have some more macros, volumes, and wall space in general to create some new movements. 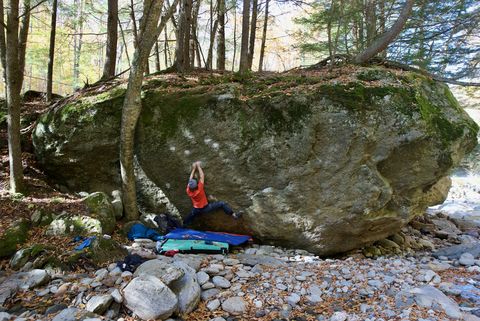