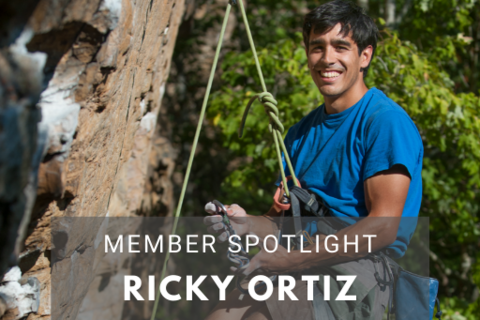 Meet Ricky Ortiz. You may have seen him in the gym climbing 5.10+ with only his right arm after he dislocated his left elbow. Join him to climb his favorite overhung routes or have a nice conversation between climbs.

Tell us a bit about yourself! Where are you from and how long have you been in Vermont?

I’m originally from Los Angeles, California, but also spent a lot of years growing up in a small town in the middle of nowhere called Needles, California. I came to VT in the spring of 2017 to work for the Vermont Youth Conservation Corps and by November that year I moved to Burlington. Generally, I just love being around people/friends and doing outdoor activities like hiking, climbing, camping, etc. In my down time, I love reading and listening to some good tunes.

When did you start climbing at Petra and how did you find out about it?

I first found out about Petra because of a roommate that invited me to watch Reel Rock 12 in November 2017. After seeing featured climbers like Margo Hayes and Brad Gobright killing it, I was like, oh man that’s sooo badass!!! But deep down I was also kind of afraid of getting into climbing and didn’t think I ever would. When the summer of 2018 came around, I knew I wanted to at least try it. Another roommate suggested I get a harness and chalk bag, and so I did. Shortly after, he took me to Upper West and the rest is history!

What is your climbing background? How long have you done it and have you traveled to climb?

Technically my first time climbing was in Joshua Tree National Park when I was 17. Someone put me on a top rope and I hated it! I didn’t like the feeling of trusting a rope and some metal pieces screwed into rock to save me from falling. It wasn’t until age 28 and living here in Vermont when I got heavily immersed into it. I went back to Joshua Tree this past winter with my good friend Will Botta, also a petra member, and got to try my first trad lead with his gear. As for my favorite thing about it, I really love the connections it has given me with other people. I love the feeling of accomplishing a project and getting to share that with those closest to me. But honestly the best thing about it is learning that I am capable of accomplishing things I never thought I could do.

Do you have a favorite route/problem here in VT?

Paradox at Upper West is my favorite climb. I love the moves and how fast you have to think to get past the crux. Generally I really like overhung walls, mostly because it’s nice to know that I won’t cheese grater if I fall. But also because I just LOVE the feeling and sensation of climbing upside down. It’s like turning your body into a crazy puzzle piece and heel hooking or campusing your way out of it.

What has it been like being a part of the Petra community?

It has been so UHMAZING! It’s what I look forward to all day while at work. When 6 or 7 o'clock rolls around I usually carpool with a close friend, walk into the gym, smell that funny smell and see everyone I know and adore. It’s is the best getting to know the staff and losing track of time. It’s definitely my second home for sure!

What do you value most about the Petra Cliffs community, especially in the current state of the Coronavirus?

I value everyone's efforts and optimism. Yes it sucks not being able to visit my second home during this period of life, but I am in a group chat message called the Climb Crew which is primarily people from Petra. That should explain a lot haha!!

What would you tell a fellow Vermonter who is thinking about getting into rock climbing?

First I would recommend a Petra pass to them. Second I would let them know that this is a place where you can learn in the gym and take it to the local crags. If they’re seeking community or if they just want a new outdoor activity to try out, Petra is the place.

What's a fun fact that many other Petra Members might not know about you?

I would have to say that I have a bit of a superstitious way of thinking. I once thought that I hexed myself on accident! I have this trust that crystals harness energy and power that most people probably think is phony. If they were formed and trapped in the earth for such a long time, how can they not be? You should look up a famous quote by Nicholas Tesla about crystals. Most of the time I wear this blue Kyanite crystal on a necklace I wove with hemp string. I truly believe it helps me to be more confident around people and while climbing.

Hip to the Jive at the Red River Gorge

Hip to the Jive at the Red River Gorge 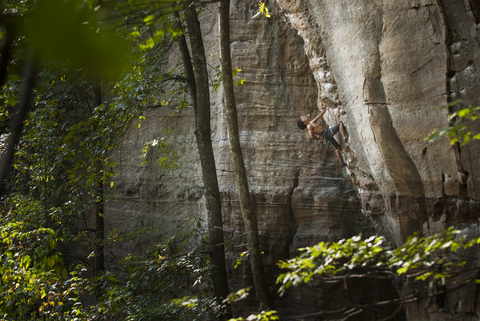 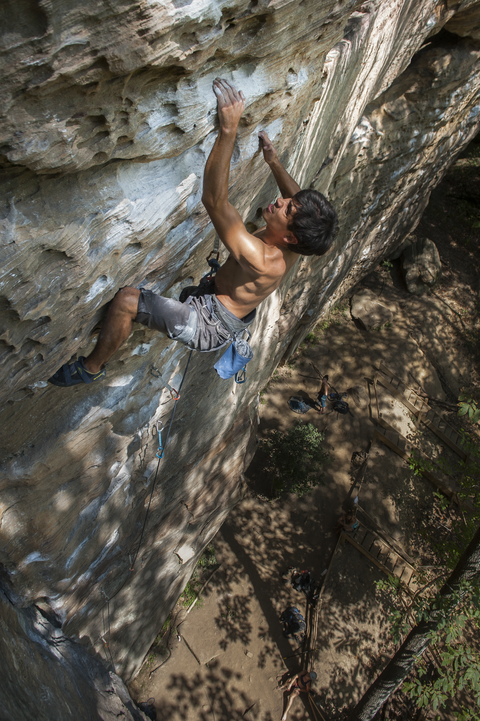