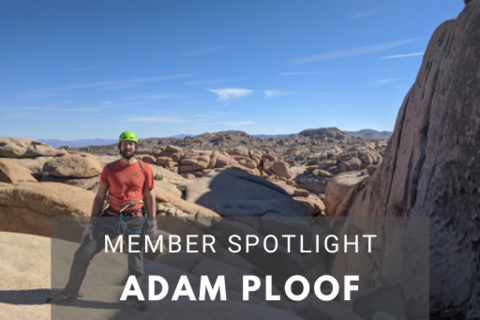 Tell us a bit about yourself. Where do you live and what do you like to do when not climbing?

Let’s see, for starters I live right in Burlington about 3 blocks from Petra Cliffs, so that’s pretty sweet. I grew up about an hour away in Hyde Park, VT which, for the trivia fans out there, is the shire town of Lamoille county. I’ve worked at City Market Co-op for over a dozen years in various roles, but right now I’m doing a combination of finance work and computer programming.

Along with climbing and working at the Co-op, I also play piano in a jazz quartet and a few other groups. Lately, I’ve been using this whole stay at home situation as an opportunity to learn some new tunes. I’m a big Elliott Smith fan and figure it’s a good chance to arrange a couple of his pieces for our group. When gigs start happening again I’ll let you know!

Do you remember when you became a member at Petra? When did you start climbing there and how were you introduced to the gym?

On an evening in December about 10 years ago my girlfriend (now wife) and I were waiting outside of Ira Allen chapel at UVM. We were trying to get into the Banff Mountain Film Festival and thought we could just get tickets at the door, but arrived a little too late. We were standing around basically trying to look pitiful enough that they would let us in. Right as the show was starting, the people working the door gave in and let us grab a couple of cramped, empty seats way in the back. It was a serious bit of serendipity that they let us in, because that was the first time I’d seen a climbing film and afterwards I was positively psyched to learn how to rock climb!

Later that winter, I got my first taste of climbing at a tiny bouldering gym in Salt Lake City while on a trip to visit a friend. As soon as I got back from that trip I headed to Petra. Not being a climber, or knowing any climbers, I honestly have no idea how I knew Petra was even there. I think it’s just that Petra is woven into the fabric of the area and so I couldn’t have not heard about it. I remember Andrea checked me in and I told her about how I’d just tried climbing for the first time recently and how I couldn’t believe how sore my forearms could be afterwards.

At first I didn’t know a thing about climbing, but was convinced that I wanted to eventually be capable of climbing wild, adventurous routes like what I saw that night at the Banff Mountain Film Festival. I still feel like there’s a lot to learn, but I have made a lot of progress toward that goal. So much of that progress is thanks to Petra Cliffs and the crew there. Anchor and trad clinics with Tim, soliciting route beta from Evan and member workshops with Steve (to name a few things) have all contributed to a skill set that has opened up a lot of cool climbing experiences.

Outdoors for sure. The gym is a great place to focus on sharpening up movement skills, get stronger and spend time with really cool people, but when it comes to climbing, let’s get on some rock!

Do you have a favorite route/problem here in VT?

Without a doubt, the Rose at Upper West is at the top of the list for routes in VT. Not only is it a cool route, but figuring out how to climb it opened up the door to the whole world of crack climbing for me. Last summer, my climbing partner and I made it our mission to improve our crack climbing game. In the spring we sucked at it. At least once a week we’d take a lap on the Rose after work and by the end of the summer we were, while maybe not great crack climbers, at least better crack climbers. Since then, while I enjoy just about every type of climbing, jamming my way up a fissure in a cliff has probably become my favorite.

When you’re on top of the Rose you can see the wall that it’s cleaved in is actually this massive detached block separated from the main wall by a 6 foot chasm. I’m no geologist, but I’m guessing the crack formed when that block broke off from the main wall and slammed to rest. Noticing what a bizzare geological anomaly it is, it feels even more special that the route exists at all.

Have you traveled to climb?

Yeah. Just about every winter for the past several years I’ve taken a trip to the desert Southwest to hang out with a friend of mine while he’s on his winter road trip (aka unemployment from his seasonal job). We tend to do a variety of things like hiking and exploring canyons, but climbing is always a big part of it. This past winter though I took a trip with my climbing partner Ryan (another Petra regular) out to Joshua Tree National Park and we climbed every day. It was awesome!

What do you value most about the Petra Cliffs community, especially in the current times?

The community at Petra Cliffs is a HUGE factor in why I climb there and I’m missing that quite a bit. The thing that I’ve realized though is that it really is a lot like family -- yeah, we’re all away right now and have to stick to our own bubbles, but you know as soon as we can get back together we’ll pick back up right where we left off.

Though I’m not on social media I have been enjoying the updates from Petra in my email a whole bunch. The member and staff spotlights have been super cool. I’ll definitely see if I can convince Gene O to try a handspring the next time I see him.

What would you tell a fellow Vermonter who is thinking about getting into rock climbing?

If they’re interested in learning to climb outside safely then without a doubt check out  the clinics and guides at Petra. I’m honestly not just saying this because this is going in the Petra newsletter. The people at Petra are incredibly generous with their knowledge and are a great resource.

More generally, I’d say there’s a good variety of climbing in Vermont so get out and explore! Also, remember to check for ticks afterwards.

Fun fact about yourself?

I’ll wager a Clif bar against anyone willing to play a game of speed chess the next time you see me at Petra. Five minutes per player. Trash talking encouraged.