You've seen them here a few times a week for as long as you can remember, and we want to give a spotlight on a couple of our favorite climbers in our community! Congrats to Susy and Serge Lazarev... you two ROCK! We even learned some things we didn't know about you- thanks for sharing! 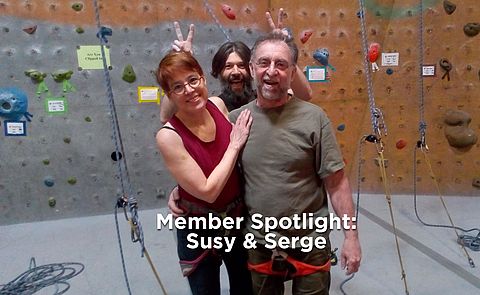 Question: Let’s get to know you both a bit. Where do you live, what do you like to do, how long have you been climbing, etc.?

We moved to Burlington in 2006 from the NYC metro area for a major lifestyle change and so our son could attend the Waldorf School in Shelburne. We chose a place a stone’s throw from Petra Cliffs and the bike trail so we could do more of what we love– snowboarding, skiing, biking, sailing and of course climbing.

Question: What is your climbing background like? How long have you done it, where have you traveled to climb, what’s your favorite thing about climbing, etc.

Serge:
We both started climbing around 1989 at one of the first New York City climbing gyms, the City Climbers Club. The walls were not high, the routes were very technical and you’d blow black crud out of your nose for hours afterwards because the floor was “cushioned” with shredded car tires.

While climbing there I became involved as a translator for the French Climbing Federation with an early attempt at standardizing climbing rules and route ratings between the US system and Europeen system. These meetings were often accommodated with visits to the Gunks (Shawangunk Ridge) where I was first introduced to climbing outside on real rock.

Susy:
I just always liked to climb. I was a tree climber as a kid and basically never stopped climbing. During adolescence while others had ‘moved on’, I was still wanting to climb trees and ride my bike- and climbing gyms did not exist yet. I remember feeling ashamed while climbing and not wanting to be seen.  My cross country running coach in high school had always promised to take me climbing outside but never did. I am certain that my life would have taken a decidedly ‘dirtbag’ direction if he had!

As the climbing gym scene started, I dove right in. I moved my office next to the gym in Connecticut. I climbed nearly throughout my pregnancy with our son Lee.

When Chelsea Piers opened in Manhattan, I joined there so I could boulder, top rope and lead on a larger wall. It took me a really long time to feel like I was a part of the climbing community there. I don’t want to say it was not friendly but it was so hard to get a belay if you did not show up with a partner. If you did get someone to belay you they would walk away afterwards, or never say ‘hello’ again! It was the oddest thing! It got much better for me there after I found some regular climbing partners. Anyway,the facility itself was great and my gym routine was to run a mile on the indoor track before climbing, boulder and then either top rope or lead climb for 3 hours, cool down stretch and then take a sauna. They also had a sushi bar, salad bar and juice bar. It was a lot of luxury!

Serge:
Although we have some outdoor climbing experience in the US and Europe–  Cathedral Ledge in NH, the Gunks in NY, the Dentelles de Montmirail and Fontainebleau in France– we have mostly climbed indoors. As working parents, it has been easier to fit into our lives.

My attraction to plastic is the challenge of the puzzle. It’s a little bit like playing chess where you have to foresee the moves. However, unlike chess, you have to perform the moves yourself and you have to play all the pieces whether crimps, slabs, or slopers.

Susy:
I also like to solve the puzzle of a climb and feel my body going through the moves. I like to try to climb as quietly, calmly and smoothly as I can- regardless of the grade. In fact, it’s not really a number thing for me. It’s more the pleasure of moving on the wall.

Question: How has your involvement in the Petra community/Vermont climb community evolved over the years and what has it been like being part of this group?

Petra Cliffs is such an important part of our lives. We climb a few times a week there, it connects us to the climbing community and it’s a big part of our social lives.

Serge:
Our involvement with Petra Cliffs took a more proactive turn in 2007 after Steven and Andrea Charest became owners of the gym and we took over the Burlington Wall Climbers Meetup group that our friend Bert had no longer the time to maintain. Since then our group has grown over time from a dozen members to the 500+ that we have now.

Of course not everyone who has ever joined us kept at it, however we have a solid core of regulars. Since we've had members moving away, some getting married, some coming back, etc... Each time we see someone alone at the gym we just invite them to climb with us.

Susy:
Yes! I really like to invite solo climbers to climb with us as I know first hand how frustrating it can be to look for a belay when you show up at a new gym not knowing anyone. I think of myself as an ambassador for Petra and climbing in general and want to make sure people feel welcome.

Serge:
Most of our members are people who just moved to Burlington and are looking for climbing partners or people who have never climbed before and want to try it. We take new people under our wing, whether they are first timers showing up at the wall, or seasoned climbers looking for partners.

As soon as they're done with the official belay intro from the staff, we often show newcomers around the gym and climb with them. We have met so many neat people at Petra over the years, some came once only, some never left the group. The Meetup group in some ways has gotten us closer to the Petra staff; they know we're there when some new climbers show up without a partner they often send them our way.

Susy:
I so appreciate the friendliness of the wall and the community feeling was evident right away. That is what is most important to me- the connection to others who love to climb!

At Petra, there is a shared love of climbing and it’s such a mutually supportive community. Sometimes I feel I get nearly as much enjoyment of watching others top a route or send their projects as I get from my own climbing!

I also appreciate the skill and creativity that goes into the route setting at Petra. No matter what the grade is of the climb, the routes are interesting- never just ‘ladders’ and force you to learn new moves and techniques.

Serge:
Yes! One of my favorite things is to help introduce climbing to new people. I love the look on their face when they get to the top or when their moves start to come together and it all "clicks" for the first time. Watching kids being introduced to the wall is always a treat.

Question: What do you value most about the Petra Cliffs community?

Serge:
The Petra staff are the friendliest people I know, they're just so ready to help and make everyone's experience as safe and fun as possible. I like that they're all very professional but without being bossy or condescending. From the first encounter they feel like friends there to help you have a good time, yet it's all done professionally and safe.

I like Petra Cliffs for the diversity and quality of the routes.  In my view a great gym route has to be fun to discover, possibly surprise you, and teach you something new about yourself whether it's something about finding the right move or positioning your center of gravity, etc... In the end, once you conquer that route, you come out with a new "tool" in your climbing toolbox, a tool that you'll be able to use outside or on other routes in the gym as part of a new skill.

I also like the way people are looking out for each other, not just in terms of safety but also looking out for each other's enjoyment of the gym. Come to a comp or a movie night or any evening for that matter and you'll see how the crowd here is not just customers, they're our community. You show up by yourself and you can ask anyone for a belay without ever feeling awkward.

Question: What would you tell a fellow Vermonter who is thinking about getting into rock climbing?

First reach out to other climbers. The climbing community in Vermont is not only large but also very welcoming and strong.

If you live in Vermont already it's likely that you already know someone who climbs.

If you're not from the area come to the gym and meet other climbers.

Unlike gyms in big cities where climbing is only indoors, in Vermont most climbers either sport, trad or or boulder outside end up in the gym in winter, therefore it is a good crossroad for sharing info even if you're looking for partners for climbing outside. Also unlike most gyms in big cities, Petra is a full mountaineering resource where you can get local knowledge as well as pro level guides.

At the gym you'll be able to familiarize yourself a bit before getting involved on extended outings with people you don't know. The gym is also a good resource to find out about safety regarding bolted or trad routes. There are things you can get in books but first hand accounts are often more accurate and/or recent as time deteriorate equipment and rock alike.